Wrestling in the Arena-Swim Run Quebec 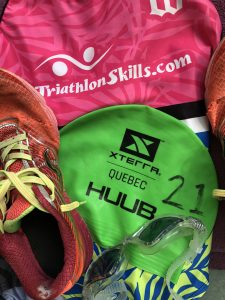 I was so excited to be done.

Running to the finish line, the next women was more than 100 yards behind me. At this point I had 15k of trail running and 2100 k of lake swimming done. Going left to the finish line instead of right for another lap, I was energized and running fast! As I approached the sparsely attended finish area the race official standing under the banner asked me if I was quitting. What? “No I am done” I said. “No”, she said, “you have another run and another swim, there are 4 run segments and 4 swim segments”. I stopped and stood there hearing what she said. What? “I thought it was 3!?”  “No”, she said “you have another run and swim”. Oh shit. Turning around, I went back out the finish shoot. I have never done that before.

Off I went. I heard Christian’s voice, one of the race directors,  off in the distance yell something like go Celeste!

Another lap, deflated and out of fuel, I had to face the realization of almost another hour still to go. Another lap was another 5 k hilly, muddy, slippery, trail run, then another 350 meter swim, 50 meter run, 350 meter swim then the final 500 meter run back to the finish line…again.  The true wrestling in the arena began…my mind more than my body. And to boot the woman behind me caught up to me given the time I lost going down the finish shoot,  then the lovely conversation I had with the race official, then back out the finish shoot. As I ran passed the medical tent on the run course, the medics hanging out in the tent were my biggest cheering section in the moment. I needed that.

Up the trail I went, back into the arena, beginning my climb. My mind was stuck on how did I miss this? I could have sworn it was 3 and 3. The original course had to be changed due to all the rain they had, the trails needed to be adjusted for safety. Fine with me. This resulted in the run being the same 5k as the Xterra triathlon the day before, the 2 loop swim was  a slightly smaller loop-still a 50 meter run between loops. Anyhow, here I was back out on the course.  My mind bouncing between resistance -“this sucks, I don’t really want to do this,  and how did I screw this up?” and moments of acceptance-“suck it up, just do this, it is not so bad, and everyone has to do the same distances.”  I was moving forward. My mind was the obstacle, not so much my body.

Bottom line, I got it done by gradually shifting my thinking from bouncing to anchored in gratitude, the beauty of the trail and all my body could do. My body was much stronger than I thought. Yes, I whined a bit to myself, maybe a lot, it is hard to quantify, but eventually that subsided.

Once I was done, showered, changed and had a little time, I was glad to have the total mileage in as training for the swim run coming up in September in the San Juan Islands. I recognize this was a tough two days of racing for me between the Xterra on Saturday then Swim Run Sunday. The Quebec swim/run was good mentally to let me know my body is more ready for the San Juan race. It is my mind my thoughts that I want the practice. I was glad I kept going for the 4th run loop, it was a challenge in the moment I got the news for sure, but maybe I didn’t show my best side. Why did I whine at all? It is an ongoing thing, awareness.

Sitting at my desk, from the comfort of my home, looking back on it all now, when not in the arena, it all seems so easy. A different story when in the moment, in the arena to wrestle. Now I see this as a fortunate encounter with an appropriate obstacle.

So, until next time… Swim Run San Juan. Stay tuned.

This entry was posted in Blog, Running, Swimming, Triathlon. Bookmark the permalink.