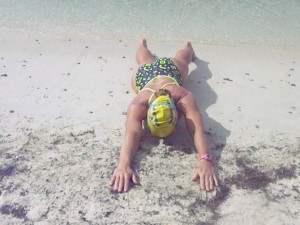 I have been playing with what I have been calling the hip shift drill for a few years now to help swimmers engage their core while swimming. I have along the way realized that this is also a great tool in teaching swimmers the two beat kick as the legs help to drive the hips when swimming to create propulsion.  I used to think the kick was a more advanced skill for swimmers and thought to save it for later, after learning balance and streamline. But, I felt it, in my own learning experience, how much the legs help to stabilize the body for balance. When done correctly the legs can also limit rotation, which is helpful for those prone to over rotating. The stabilizing of the legs also gives one a notch up when learning to breathe within the stroke cycle.

Give it a try.

Try it in the water. From a front superman float. It’s very small and subtle. The intention is to shift the weight of the hips, the body, through the core while using the legs to create some leverage for the hips to move. A big wide splay of the legs will be indicative that the hips have rotated to far. If you make a small separation of the legs with one heel rising to the surface while the opossit leg dips down, this will limit how far the hips can turn. And for a brief moment the legs will offer some stability. You want to be sure the rotation is from the hips and not the legs just moving around back there.

The hips may rotate more than you want initially as you play with this and start to notice the relationship between hips and legs. The more you practice, the more you may need to tone down the amplitude of a big rotation to a more subtle nudge down and forward.

PLay with it and see what happens.

This entry was posted in Blog, Swimming, Triathlon. Bookmark the permalink.