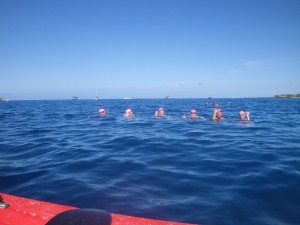 A veteran triathlete of 5 years recently asked me to start coaching her for her 2012 season.  One of the swim sets I asked her to do in the pool was to swim a series of 200’s with the tempo trainer set on 1.30 while holding the same strokes per length (spl) for the entire set.  The rest period was 15 seconds.

She did this set then reported back to me.  She held 18/19 spl for the 200’s with her time avg 4:08.  Her comments along with her report was that she is usually “faster” than this, though typically with 22 strokes,  and that she is assuming she is slower because I am asking her to decrease her strokes.

My reply to her was to learn to go faster with less strokes.  to swim her typical  sub 4:00 minute 200 yards in 18 strokes per length instead of 22, she needs to travel more distance for each stroke she is taking.   However, the first step is to be consistent taking x number of strokes over a distance.  Most swimmers take more strokes as the distance increases.  Fatigue sets in and the swimmer gets sloppy, more strokes are taken and more energy is wasted thus a spiraling downward. Not what you want to do.

By asking her to use the tempo trainer (set at 1.30), swimming a set distance (200yards) and holding a specific number of strokes (18), her time for each 200 should all be the same.  In doing this she’s learning pace, how to hold a pace over a distance, to be consistent, as well as be aware if she “fell off” (adding unnessary strokes, wasting energy) as it would be reflected in the measurements being monitored (tempo, slp, time, distance).  This swim was a start, I will ask her to do it again over the next few months to  see how she changes and adapts to her new way of thinking when she’s swims.

This entry was posted in Swimming. Bookmark the permalink.