You On the Sidelines or in The Arena? 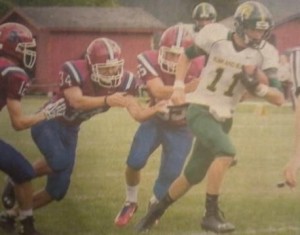 “It is not the critic who counts, nor the man who points how the strong man stumbled or where the doer of deeds could have done them better. The credit belongs to the man who is actually in the arena; whose face is marred by dust and sweat and blood; who strives valiantly…who knows the great enthusiasms, the great devotions, and spends himself in a worthy cause; who, at best, knows the triumph of high achievement; and who, at the worst, if he fails, at least fails while daring greatly, so that his place shall never be with those cold and timid souls who know neither victory nor defeat.”
Theodore Roosevelt, 1910

This quote came to mind this past weekend while watching a football game in Vermont with a good friend of mine. I sat in the stands watching the high school boys play football. One team was beating the other team by quite a bit. It’s not my favorite sport to watch, but it looks hard and kinda painful with great potential for getting pummeled during each play. I sat in the stands happy it wasn’t me out there, it’s not the experience I want to have. I had nothing to say about the game, but many of the parents and fans did.

What I thought about as I safely sat in the stands is how easy it was for the spectators to criticize the players. I say to the critics, get out there and play, show them how it’s done!! It’s very safe and easy to sit on the sidelines while the boys play on, doing the best they could from where they were…on the field, in the arena as Roosevelt states. They were brave and vulnerable at the same time. To be vulnerable is to be brave. To get out on the playing field, into the arena where you could get the snot knocked out of you, and in football quite literally, too!

I use this as a metaphor.

It’s easy to sit by and watch others put it out there, to be vulnerable, as they risk being exposed, to risk being knocked down. I feel this as I share chapters of my book, my life experience and my thoughts with those attracted to my stories. I will take any constructive criticism from anyone on the playing field of life with me, in the ring, willing to risk, to get dirty.

And To those critics on the sidelines, in the stands…join me in the vulnerability ring, then tell me what you have to offer.

This entry was posted in Blog, Health and Nutrition, Uncategorized. Bookmark the permalink.