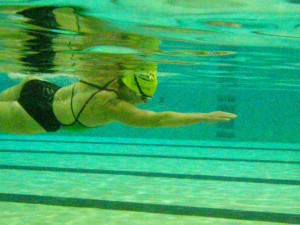 I woke early this morning, early enough to get to the pool to swim during morning lap time versus noon lap time. I hurried out the door after a small bowl of steel cut oats I had cooked earlier in the week. It’s 30 min door to door to the pool, change into suit, grab cap and googles-put a smudge of shampoo into the goggles for anti-fog purposes, a quick cordial hello to the other swimmers coming from their swim, cleared my watch to monitor my time, and into the chilly water I went. My goal for this swim was to hold 17 strokes per length while keeping my left elbow from plopping on entry after the recovery. Time was limited, I’d likely get in 1600-1700 yards before lap swim was over, yet I felt calm and settled into 200’s.

At times I was spot on with the count and the turn at the wall, others it was a long stretch to the wall. Tempted at times to take 18, I held to my budget-17 was all I had to “spend.” If I didn’t make the wall on 17 it indicated to me that I lost focus somewhere during that length, instant feedback-I spaced out and as a result became a little less efficient. Good to know, adjust, stay attentive. It was a little challenging at times to not try so hard, forcing or using more muscle to power through the water. At times tempted to just not worry about the spl and let that 18 slip in, but alas I held onto the goal. My intention for this swim was also to stay relaxed, so forcing anything was not what I wanted to be rehearsing, yet occasionally felt the temptation to just tense up on the catch and pull! I knew that was not going to help though, so dropped that thought.

I ticked away at my swim, enjoyed the relaxed sensation especially in my neck and shoulders as I allowed these muscles to shut down as much as possible. I held my 17 throughout. I hopped out of the pool having felt I achieved what I wanted with minimal effort, ignoring the occasional desire to just get it over with-ah the ego up to its old shenanigans.

Post swim I headed to the coffee shop to sit and write. Just as I opened my iPad I felt a little tug to open my iBooks app first. I had been reading Deepak Chopras book “The Seven Spiritual Laws of Success” but it had been a little while since I’d read it. “How funny!” I thought as I opened it, because this is what I now opened it to: “4 (the 4thlaw) The Law of Least Effort.” How spot on! It could be “the law for Total Immersion Swimming!” Oh wait it IS the law of TI swimming!

As I dove into the chapter what I learned is in Vedic science, a philosophy of India, this is “the principle of economy of effort” or “do less, accomplish more.” It fits perfectly into my goals and intentions for the morning swim, which can also be a metaphor for life.