From Sprint Tri Beginner to Half Iron Champion 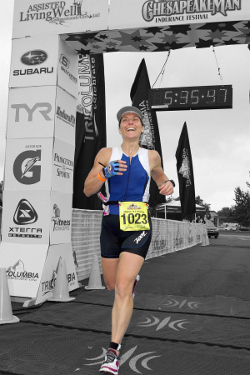 My name is Sarah Crane. I am a personal trainer and professional bodybuilder. So why am I doing triathlons? The challenge! Just beingin shape will not make you have a great experience doing a new sport, but meeting Celeste St. Pierre made it an experience I will never forget!

It all started as a near death experience at the Timberman Sprint Tri. I thought “I can swim 1/4 mile,” I finished that swim but there was truly nothing that resembled swimming about it. I thought I was really going to die out there. I set my thoughts rolling on how could I get better and actually swim.

I didn’t know anyone who did swim lessons and was not sure where to start. Then there was the day I saw Celeste St. Pierre at the King Pine Tri. She was on her trainer warming up before her race. I could not believe those wonderful legs! As I was telling a friend about this woman that I had seen, she proclaimed “That’s Celeste, my swim coach.” And so the journey began.

Early spring 2010, I hired Celeste and drove from Nashua, NH to Lincoln, NH for my lessons. I was frustrated that I could not just be told what to do and do it. It was through the progressive steps from Celeste that I slowly began to swim. She was patient and thorough. It took me that entire year of practicing many drills and not doing a whole lot of continual swimming — but that was about to happen.

I the winter of 2011, I finally got a membership to a gym with a pool and practiced three times a week what Celeste was teaching me. With continued lessons, the drills became strokes and the strokes became lengths of the pool and the lengths became laps! It was a miracle in my eyes!

I then decided to hire Celeste for my Triathlon training as well. She started to guide me and help me build my endurance and avoid injuries; I was ready to do a race again.

I signed up for another sprint tri. Not only did I not finish last as I had done the previous year in my age group, I came in 4th in the swim! And as the race continued I applied what I was learning and conditioning for with Celeste’s coaching and I not only won the age group, I came in 2nd overall! I was very happy but I wanted more.

I made the decision to change focus and do a 1/2 iron distance triathlon– a big jump for sure. On September 24, 2011, I did it! With Celeste’s expertise and support all the way through I had the most phenomenal experience of my life. My conditioning was dead on, my nutrition was great, the mental focus unbreakable. It was my day.

I crossed that finish line in time to take my age group and also the title of Master Champion! It was a day that I can say was in the top five experiences of my entire life. I would not have had that success without the knowledge and support that Celeste provided me.

This year 2012, I will train again, with Celeste and do my first full distance Triathlon-Ironman. I know if I apply what she has given me that I will be as ready as I can be. If you want to be the best you can be or just try something new, Celeste will take you there.

This entry was posted in Triathlon. Bookmark the permalink.