A Lesson from Racing 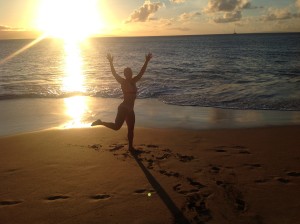 I recently did a triathlon and won as overall woman. But it’s not the win that moved me it was that I had realized I was giving up on myself and was able to turn it around.
As I was running I woke up to this. Up until the run, through the swim and the bike, I didn’t know I was the lead women, I was just going along, pushing myself to go as fast as I could, eat a little, and stay warm, have a smile on my face. But by the run I overheard some spectators say I was the first woman. As I started the run a woman on a bicycle started to follow me, she confirmed to me I was the lead woman and that she would be my escort to the finish line. It was here that the voices surfaced, well the voice is always there, it’s just that I started to hear it say things like, “Yeah, you will stay with me until some younger faster woman comes along”, “I’ll enjoy your company while I can”, “I’ll never be able to sustain a pace fast enough to stay in the lead, I know I’ll fade.” Mentally I was sabotaging my own efforts, I was handing the race to the other women, I wasn’t even going to try. I expected so little from myself in that moment. If I had a coach and she was on the sidelines, yelling to me, and these same words came from her it would’ve sounded like this “Celeste you are to old to win a race, you really haven’t done enough training, you are to slow to keep the lead, it doesn’t matter, you’ll get passed, who do you think you are?” Can you imagine! I would’ve fired her and if other people heard her, they would’ve thought she was a terrible coach. And yet here I was saying this to myself! I know I am not alone in this, I know others have similar experiences.
My challenge was not the women behind me, they too are doing the best they can. My challenge was this voice, the voice of giving up on myself, expecting little of myself. I am glad I recognized that I was starting to listen to this old tape by becoming aware of it. Though its not really “my” voice but the voice of the little me ego- the false image of myself. It developed over years from my own unconscious judgements, misinterpretations, and from absorbing what others around me said or believed.
Once I was aware of it I could then decide not to listen to it. Listening to it would only constrict -both my mind and my body. Recognizing but not listening to it would leave me open, relaxed, pure potential. The challenge was to stay open, by being focused on one step at a time, my breathing, my form and looking at the road, my path, literally, before me.
Crossing the finish line was a joyful moment because I wrestled with that voice, yet I stayed aware, focused, I payed attention, I made conscious choices. It had nothing to do with the other women, though they, and the race provided the venue for this moment. Under perceived challenging situations we can learn the most of ourselves.
And what came of it was that this experience no matter the outcome would neither elevate me, nor diminish me. I am. We are.

It’s an on-going process to pay attention, in all that we do.

This entry was posted in Biking, Blog, Health and Nutrition, Running, Swimming, Triathlon. Bookmark the permalink.