The Universe Breathes Us 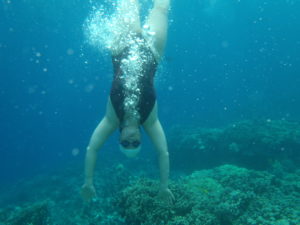 Exhale under the water

I Love the notion that there is more than one way to look at something and that a simple shift in how we look at it can open us up to a new or deeper understanding. The most common challenge in swimming that swimmers and people who have given up on swimming discuss is the breathing. Such comments as, I am fine until I take a breath, or I used to swim but could never get the breathing down. So, I offer a few different approaches to your breathing when it comes to swimming.

First, pay attention to your breathing on land. While driving your car, washing the dishes, standing in line or talking with someone. Or make it a practice to sit for 5 minutes and just notice the breath moving in and out. It is an involuntary activity-thankfully-by the parasympathetic nervous system. It is doing it for us, so we never really pay attention to it…until we need to when we can’t get it such as in swimming. This attention also has health benefits such as connecting the mind and the body. It has a calming effect on us, which can come in very handy when making the breath connection with the movements of swimming. Notice how you feel while you are taking those breathes. Breathing happens, take time to notice that it is happening before getting to the pool.

Second, is to let go of the idea that we pull air in when we breathe. In a nutshell, due to atmospheric pressure outside of the body, air is pushed into the open cavity of the body (thoracic cavity). So when the thoracic cavity is empty post exhale, atmospheric pressure wants to fill that empty space, that empty cavity. Air is pushed in through the little opening of the mouth. It only fills what is empty. In swimming you need to let the air out, exhale while the face is in the water to then allow the air to be pushed back in by the atmospheric pressure outside of the body. That little opening of the mouth, that little space allows enough air in to sustain the functioning of the body. Create the space, literally, and let the universe do the rest.

Third, is to practice a little yoga or a little stretching. Do this with attention to the breathing. You may notice you have an inclination to inhale as you extend and exhale as you contract. For example, when you get out of bed in the morning and you feel the desire to reach arms up and stretch, you will likely do it in conjunction with an inhale, then bend forward and exhale. Practice this a few times, stand and stretch up with the inhale then bend forward or bring your arms back down with an exhale. The next time you are at the pool, notice that you are inclined to inhale as you extend your arm forward while rolling up, then exhale as you recover your arm back into the water.

I know the breathing can be a challenge at first, but try these approaches, really give em a go and don’t play tourist by standing on the sidelines! A change in perspective and perception can shed new light on an old challenge.

This entry was posted in Blog, Swimming, Triathlon. Bookmark the permalink.